The fun of being a refugee

Not many people know what is really happening in refugee camps. That's why the refugees of Oreokastro tell true stories about their daily life in a Facebook-Blog. Even riding on a bus can bring unanticipated complications.

After the police evicted the camp in Idomeni at the Greek-Macedonian border, thousands of refugees were put in army-run mass camps where the living conditions are mostly catastrophic. One of these camps is situated in Oreokastro, a suburb of Thessaloniki. 1300 refugees are living there in an empty factory, in very limited space. As everywhere else, an NGO was responsible for the organization of daily life in the camp in the first months. However, the NGO proved to be unable to create dignified living conditions. Especially the food distribution lead to dissatisfaction among the camp residents. At the end of July, they'd had enough and they threw the NGO out of the camp. From now on, they are organizing themselves in a refugees council. To raise awareness of their situation, they have a Facebook-Blog called The Voices of Oreo Castro. The texte published here is taken from this blog. (ed.) 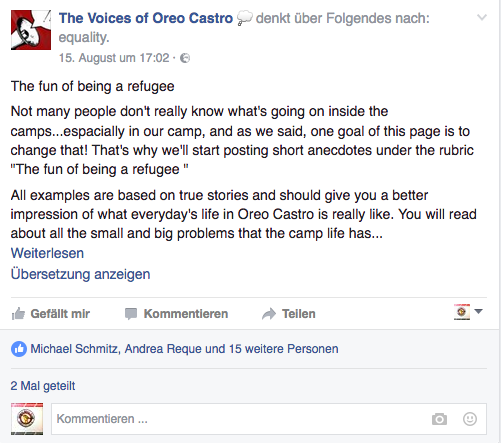 Not many people don't really know what's going on inside the camps...espacially in our camp, and as we said, one goal of this page is to change that! That's why we'll start posting short anecdotes under the rubric «The fun of being a refugee».

All examples are based on true stories and should give you a better impression of what everyday's life in Oreo Castro is really like. You will read about all the small and big problems that the camp life has to offer...But also you have to understand that we cannot talk about the bad things all the time...
We know that Greece is truly trying to help us and but according to them we must keep our optimism.

This is why we decided to share a little of our optimism with you and the facebook community! For us the cups are half full, not half empty.

You will read about how cooking a meal on the open fire creates a beautiful romantic atmosphere outside in the Greek wilderness or about the advantages of a free and empty parking space available all the time – even right in front of our door! Luckily, the Greek authorities are protecting us by sending independent volunteers away that could possibly occupy this free space which, as we asume, is meant to be for our cars that we are going to buy – as soon as we will find a job.

But for now let's get back to reality...

We don't own those cars yet. That's why we still have to take the bus in order to get home.
Taking the bus is always a really nice and authentic experience of Greeks and their welcoming culture. Because the bus drivers usually don't speak any English, the bus company was even so kind to provide us with a special ticket officer that only works on our bus line. He's available all the time and and willing to help whenever we need him.

Also, he's very concerned about our safety. That's why he desperately tried to stop one of us to get on the bus because he was carrying an old basket made out of metal with fruits and vegetables inside. Out of frustration, because we were unable to understand his English information, he decided take initiative and pushed the refugee outside. Because our English wasn't good enough and we couldn't understand what was happening, they even offered calling the police to help us out.
Luckily, the found an old cleaning lady that could manage translating: Using the metal basket on the bus,would put us and the other costumers in unforseen danger! We were thrilled by their concern.

After we had solved the mystery we put out all the plastic bags and folded up the dangerous basket. Finally, we were about to take off to our 4 km long journey. Now that we couldn't use the basket anymore the bags with fruits and vegetables took a little more space than they usually would do.
Because another bus driver had noticed our dilemma he sacrified 10 minutes of his lunchbreak to come out of his office just to advise us to rent car next time – it would be so much easier and more comfortable. It was really sensitive of him to use the word «rent» because he knows that we don't have enough money yet to buy our own cars.

Very thoughtful Mister... In the name of all refugees of Oreo Castro we want to use this occasion to thank you and the Thessaloniki bus company for treating us like they would treat any other customers.