The inhabitants of Oreokastro, the Greek refugee camp, have kicked out the NGOs responsible for them and have taken over the day-to-day running of the camp themselves: a small ray of hope that nevertheless can’t blot out the adverse conditions of life in Oreokastro.

The Refugees Council of Oreokastro camp near Thessaloniki is proud to present the fruits of their labour: «Through our self organization we managed to buy what we really needed. No more soap , finally we can wash our hair with shampoo 😊😊 😊» The quote appears in both English and Arabic in The Voices of Oreokastro’s Facebook post. The blog is run by inhabitants of the camp and was already featured in papierlosezeitung.ch.  Other posts present the new Women’s space  and you can see the council and helpers distributing food in the former stockroom, where 1,300 people are currently sheltering in tents under the tin roof. All’s well in Oreokastro? By no means…

Poor provision from the NGOs

The media attention on the refugees’ situation in Greece has dwindled sharply since May 2016, when the so called Balkan Route was closed and the transit camp at Idomeni on the Greek-Macedonian border was cleared. Currently more than 50,000 people are stranded on the Greek mainland and have been sent to camps all over the country. These camps are hardly worthy of the name and are often just a collection of tents made out of fabric and portaloos. Most of them are set up on old military territory or in empty industrial buildings, which are remote and difficult to get to using public transport.

Oreokastro is one of these such camps. It’s about 11 kilometres away from Thessaloniki, the second largest city in Greece. There’s no relief from camp monotony here. At the entrance, police officers monitor who goes in and out. Officially only camp inhabitants and staff from official, registered NGOs are allowed in. At first the inhabitants had hoped that the situation in the camp would improve if cooperation with camp officials and the NGOs went smoothly.

They no longer have any such illusions. Mohammed, who has been living in Oreokastro since May, explains:

»We’ve had to watch how the incompetent people from the NGOs let food meant for us rot in containers in the sun.»

He makes serious allegations against the persons responsible: «They took what they needed, even distributed some to the police. But we didn’t get any of it. We didn’t get anything we needed. No shampoo, no washing powder, just soap. No tea, no oil and no fresh vegetables. Nothing that we could have cooked ourselves, although that’s really important for us. Cooking is social and gives us something to do while we’re stuck here waiting. Also it means we can decide what we and our children eat ourselves. In this camp, where we’re shut out of every other decision making process, that makes a big difference. We told the camp administration about the bad provisions here, but nothing was done about it.” 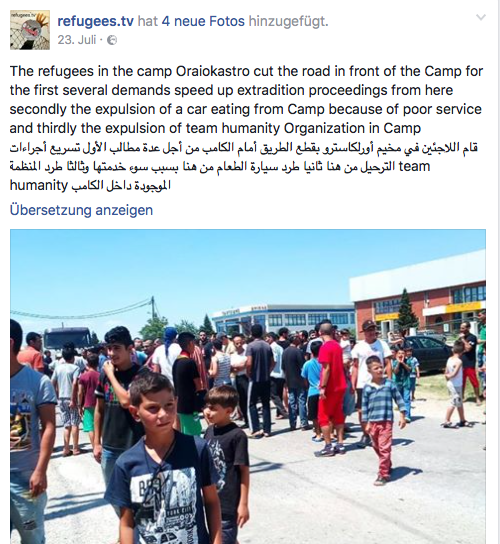 The first signs of resistance against the camp organisations and the administration appeared in July 2015. The inhabitants decided they wouldn’t be ignored any longer. A lot has happened since then. They kicked the organisation Team Humanity (see box at the end of the article) out of the camp at a protest at the end of June and demanded to be included in the camp’s decision making process. They’ve started to collect donations and the food and toiletries they really need themselves, together with some independent volunteers. They’ve also set up a group, the Refugees Council, in order to represent the diverse make-up of the camp, and to take part in the weekly meetings with the officials, camp administration and the organisations involved. 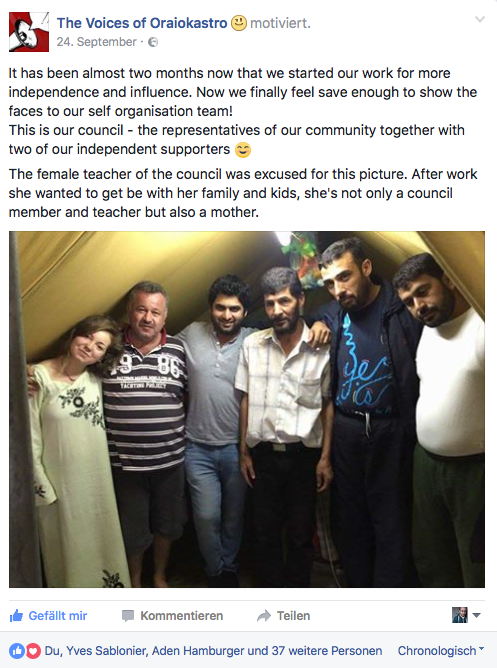 The Refugees Council gets results

The council has managed to set up a school and organise a women’s space. «We had to have a lot of discussions with everyone involved in the camp. But now we have a school. We teach different age levels and many different subjects, from science to maths to history, and of course languages. Except for Greek, all the subjects are taught by people from the camp. Volunteers help with English. They’ve also helped us to buy teaching materials. This gives us a bit of hope, and we can learn,» says Laith, a young man who has started learning German on the internet, because he doesn’t want to stay in Greece. Refugees have started to organise themselves autonomously in other camps as well, as in Lagkadikia, for example, where the group Jafra Refugee2Refugee Support was founded.

After the first months of self-organisation Mohammed, one of the co-initiators of the council, can take stock:

«We’ve managed to improve the provisions for the people in the camp somewhat. But there were some things we couldn’t change, for example the officials’ and the police’s mentality towards us.»

Often they don’t turn up to the meetings. Mohammed's bitter conclusion: «They don’t take us seriously for the sole reason that we’re refugees.»

The neglect of the refugees has had fatal consequences. There’s a main road right in front of the camp and on the 16th October, a woman and her son were hit by a car and killed. «We told the officials, the police, the NGOs again and again: they should have put out warning signs and speed limits on the street in front of the camp. Why didn’t they do anything? Do people always have to die before they’ll act?» Mohammed says, angrily. After the fatal accident, it became clear how tense the atmosphere in the Greek camps had become. There was rioting. Refugees set fire to the car involved in the speeding accident, the driver fled to the camp's police station where he was taken into custody. Bins burned, the riot police intervened.

The only real solution: Open the borders!

Despite the successes they’ve had, autonomous organisation can’t solve the camp inhabitants’ main problems. Mohamed isn’t optimistic. «We’ve been in this awful situation for so long now, we can’t cope. They tell us that we have to wait, but the waiting is unbearable. Nobody seems to care how we are. It’s natural that people are getting angry and desperate in our situation.» On top of uncertainty and lack of prospects, they have to contend with widespread everyday racism. The Voices of Oreokastro wrote about it in their sarcastic column The fun of being a refugee. In September, the parents’ association in Oreokastro threatened to occupy the school if children from the refugee camp were allowed to attend.

«We don’t want to stay here. Greece is a poor country, it can’t take in so many refugees,»
Mohamed says.

«The EU has to reopen the borders and give us the chance to live in a place where we can build a future for our children in safety and with dignity. We’re barely surviving here!»

The only real good news from Oreokastro is when someone makes it to the sought after destination of Germany, despite all the obstacles. Like Laith did, the young man who started learning German in the camp, a few days ago.

The Danish NGO Team Humanity is one of the many groups which were founded along the then open Balkan route in summer 2015. Team Humanity was active on the island of Lesbos, where they mainly carried out sea rescue operations. As a result of their activity, two members were rewarded with criminal prosecution from the Greek state for «human trafficking». The group subsequently moved their focus to Idomeni, where according to their own information, they were responsible for Area D of the camp. After the clearing of the camp, Team Humanity was in charge of humanitarian and medicinal facilities in the camp at Oreokastro. It’s debatable whether the NGO deliberately misappropriated food and neglected the interests and wellbeing of the camp inhabitants, as the refugees suspect, or if it’s more likely the case that an inexperienced, somewhat naive organisation got caught in the middle between an overstretched state and exasperated refugees, and then lost their own way.

Go back to the article!

Translation from German by Lucy Godding